The One You're With 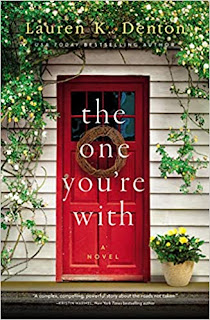 The One You're With, by Lauren Denton, tells a very interesting tale.  Mac and Edie Swan seem to have a perfect life.  But when a young woman suddenly shows up at Mac's medical practice, he realizes that his past has caught up with him.  There is no doubt this woman is his daughter.  She looks exactly like Mac!

Now Mac must fill Edie in on additional details from his college days; however, Edie also has a secret of her own that has yet to be revealed!

Watch and see how this family, as well as, many of their acquaintances respond to these situations!

I received this e-book  from Thomas Nelson in exchange for my honest review. 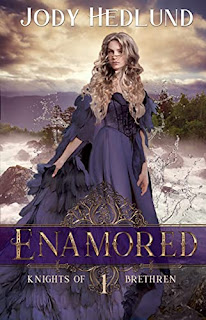 Enamored, by Jody Hedlund, is a tale, full of knights welding their swords in an attempt to gain the attention of Princess Elinor. She must choose the man who will reign with her as the next king. But this is not an easy choice for the adopted daughter of the current king of the land. None of these gallant men have caught Elinor’s eye!
Thoughts of Maxim Gandrud, the son of Rasmus, the Royal Sage, have never left Elinor’s mind. The boy, who left ten years ago, is now a strong and handsome man. Maxim, currently training to be a sage, is not eligible to be considered for the lofty position as future king of the land. Maxim had been Elinor’s best friend since their youth. Now she wonders if he even cares for her anymore. So Elinor feels she must look elsewhere for the husband she seeks!
When Rasmus suggests using an ancient sword to determine who should be the next king, Elinor is relieved to have this decision taken out of her hands. The man who can pull the sword free would be the next king!
Before this man is even determined, Elinor discovers a plot at play that seeks to take her father’s life. Do not be surprised when both Elinor and Maxim find themselves in the midst of the battle!
I received this e-book  from Jody Hedlund in exchange for my honest review.
Email ThisBlogThis!Share to TwitterShare to FacebookShare to Pinterest

The Ears Have It 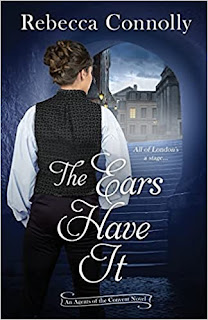 The Ears Have It, by Rebecca Connolly, tells the tale of Emmeline Bartlett.  By day, she teaches girls at a finishing school; however, in the darkness of night, Emmeline is making her way around the cobblestone streets of London.  She is gathering information to use under a pseudonym, to inform the public of the evil deeds taking place in their fair city!

One evening, as Emmeline is being pursued by some rough characters, she literally runs into Theodora de Vickers y Mendoza.  As their actual names are not initially exchanged, they simply go by their nicknames, Captain and Ears.  Theo had originally come to England to help build up his family's business, but now he has changed his focus.  Helping look out for the children, living in poverty, on the streets of London!

The evening before Emmeline must return to school, she and Theo meet in a place you never would have expected.  This tale will end in a very interesting way, full of talk of spies and all that entails! 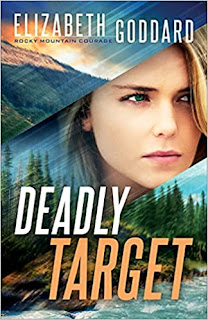 Deadly Target, by Elizabeth Goddard, begins with main character, Erin Larson, feeling like she is in someone’s crosshairs. Erin and her girlfriend barely make it out alive, when they are targeted by a high powered boat as they are calmly paddling their kayaks down a waterway!
This targeting seems to continue when Erin’s former boyfriend, Nathan Campbell, watches his father suddenly struck-down with a bullet as they are fishing. This father and son duo had recently renewed their relationship and Nathan does not know which way to turn to discover who is behind this deadly act!
After a dam break lets loose a flood of fast moving water, Nathan and Erin almost lose their lives.   They suddenly realize they are both in trouble. Both Erin and Nathan decide they can only move forward by solving a cold-case, that Nathan learned of from his father, to discover who may want to take their lives!
This is a high-paced tale with unknowns and action from beginning to end. Nathan and Erin have no idea who they can trust. You will not believe who is behind all these attempts to take Erin and Nathan out of the picture!
I received a copy of  this book from the author and  Revell in exchange for my honest review.
Email ThisBlogThis!Share to TwitterShare to FacebookShare to Pinterest

Make You Feel My Love 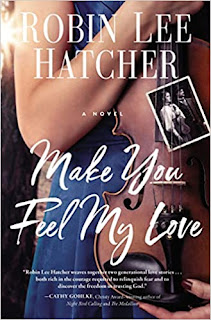 Make You Feel My Love, by Robin Lee Hatcher, jumps between two stories.  The first takes place in current day and the second in the year 1895!

Hollywood actor, Liam Chandler, has returned to his vacation home in Chickadee Creek, Idaho.  Following his younger brother's death, Liam is hoping to deal with his grief.  He soon meets Chelsea Spencer, who is in town to help her injured aunt.  When Chelsea finds a valuable treasure in her aunt's antique shop, you will not believe who was the original owner!

In the year 1895, Cora Anderson is living amongst the elite of New York City.  Her father wants her to marry a man of this world; however, Cora has no interest in his selection.  She would rather make her life playing the violin than to marry some rich man of her father's choice.  You will be surprised by the decision Cora makes next!

As Liam helps Chelsea reorganize her aunt's shop, they not only learn a lot about Cora, but also about themselves.  In the end, Chelsea and Liam discover that beauty can truly come from ashes!

I received this e-book  from Thomas Nelson in exchange for my honest review. 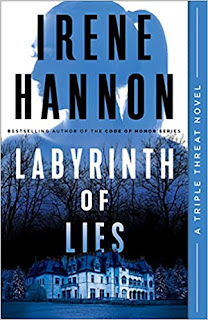 On the pages of Labyrinth of Lies by Irene Hannon, detective Cate Reilly is sent to an exclusive girls boarding school to discover the whereabouts of a wealthy man's missing daughter.  As Cate begins her undercover work, she unexpectedly encounters Zeke Sloan, a man from her past.  Cate is not sure how to react to this complication!

Both Cate and Zeke have specific assignments they hope to complete; however, they are unsure that they have gotten over their feelings for each other.  Watch as Cate and Zeke meet some very interesting characters on this campus, as they investigate their individual cases!

You will be surprised when their cases begin to blend together.  By the final pages of this tale, you will see Cate and her roommate attempt to rescue themselves from a very dangerous situation!

I received this e-book  from Revell in exchange for my honest review.

A View Most Glorious 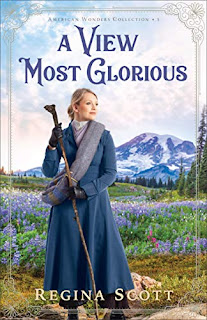 A View Most Glorious, by Regina Scott, opens up with Caroline Baxter attempting to convince Nathan Hardee to accompany her to the peak of Mount Rainier.  The year is 1893 and Nathan does not trust that this woman and her father will be able to pay the fee.  Also, his experience with society women leads Nathan to believe that she may not be up to the trek!

After Nathan agrees to accompany Caroline and her father up to this amazing mountain peak, he is surprised to see all that Caroline is able to do on this dangerous journey.  Once Caroline finally accomplishes her goal, you sense that she has begun to feel a bit attached to Nathan!

The next question concerns whether this attraction is strong enough to cause Caroline to leave the wealth of her current world to embrace a quieter life with Nathan.  Hold tight for an exciting conclusion to this tale!

I received this e-book  from Revell in exchange for my honest review.